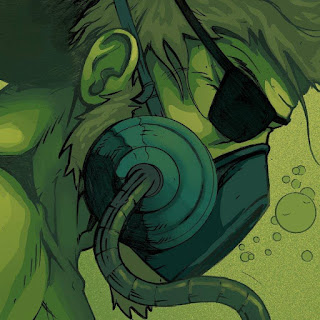 This review is prefaced with the fact that the initial read was done in 4D. The soundtrack to the comic, Crobot’s “Something Supernatural” was blasting in my ears as I embarked on the journey into the world of the “Legend of the Spaceborne Killer.”

I’ve officially ventured in the picturesque world of Pro Hobo Comics debut, “Legend of the Spaceborne Killer.” There’s no going back now. My experience began with the titular song, “Legend of the Spaceborne Killer,” rocking in my ears and penetrating my imagination. I am then introduced to The Great Spirit during the changing of the four seasons. I am witness to the pondering of creation methods for a last universal essence. The Great Spirit is formulating senses that this last essence should posses. Will the essence be given the senses of man? Now, I begin to ponder my own evolved senses. Am I really what I think I am? At this point, there’s nowhere to hide.
As I continue, I find myself processing galactic landscapes that dwarf my own sense of self. The Great Spirit has introduced me to the notion that our senses are our only true guide. However, the sense of physical sight is suspect. Do you really comprehend what you’re seeing? I’m now ready for an inter-dimensional space ride.

I’m immediately transported to a secret, governmental facility and thrown directly into an intergalactic daydream.  I’m anxiously awaiting the connection between the characters I’ve come to know through experiencing the soundtrack. I am introduced to a cosmonaut while listening to “Le Mano De Lucifer.” The 4D experience hits its peak while I’m visualizing a fully aware galactic prisoner. As soon I’m invested in the mission of the cosmonaut and his female partner, I am witness to an extreme change in circumstance just as Brandon’s hauntingly melodic scream of “The Skull of Geronimo” pierces my eardrums. My soul chills.

As I witness an intergalactic transport, I’m attempting to forecast the fate of the cosmonaut’s female partner while listening to “Cloud Spiller.” The lyrics of the song penetrate the artwork that is before me. The connection between both the imagery, words and lyrics to the soundtrack album is becoming increasingly clear. I am now dropped in the middle of an interstellar dungeon as soon as Crobot’s “Night of the Sacrifice” strikes its first chord. I’m seeing an impatient, unsatisfied space prince of sorts.  My senses where colliding hearing the lyrics “crimson-soaked swords/no one gets out alive.” This is a perfect ending apex to the first chapter in the “Legend of the Spaceborne Killer.”

I thoroughly enjoyed this 4D experience. I highly recommend pairing the album and comic together to experience the full effect. This is a beginning of a great story of sense and perception. We may not be what we think, or told, we are. We may not be perceiving and comprehending everything we see. I look forward to future issues and the continuation of this experience.