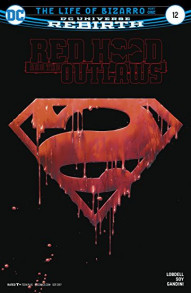 Here’s my first Big Two review. Deep breath in, exhale. Here. We. Go.  DC Rebirth has been a big success for the company, no one is arguing that point. Not every series has been gold however. For every issue that makes me want to hug the creative team, there’s one that makes me want to do meaner things to them that my “psychiatrist” calls “projecting”.

This brings me to “Red Hood and the Outlaws”. A series that has NO RIGHT to be as good as it is. Previous versions of the motley crew of Red Hood and his band of misfits have historically felt more like a Michael Bay film than anything else. Big dumb action, incoherent plots and dialogue, over muscled men whose emotions that range from anger mixed with smugness to smugness mixed with anger, and women so hyper sexualized it caused me to use the word "hyper" unironically. This iteration seemed to be no different, our titular Mr. Hood has found partners in Artemis and Bizarro, a team-up that caused me to roll my eyes so hard that I gave myself vertigo.

The crazy thing is that this is one of the best titles of Rebirth. Holy crap! It’s fun and exciting and, most surprising of all, each character is more developed than “Let’s join forces and kick some ASS!”. The trio is overconfident and arrogant like any good young hero, but it belies a pain and insecurity that comes from being the failed versions of their predecessors. These are people who have never lived up to their potential and have bonded in their failures, something rare in a superhero comic. There’s a sadness in their union, a mutual understanding that they are in this position because there is no other place for them in this society. All they have is each other. It’s a family that stands strong because it’s members hold each other up with every ounce they have, because what else is there? They feel real, or as real as a resurrected vigilante, an exiled Amazonian, and the failed clone of Superman can be.

Issue 12 begins “The Life of Bizarro” arc. I won’t go into into backstory because catching you up on the last 11 issues isn’t what I’m being paid for. I’m being paid (cough cough PAID RYAN cough cough) to inform our loyal readers what comics are worth dropping cash on.This issue is definitely that. Our team has barely survived their last ordeal and the squad’s resident lovable oaf is much the worse for wear. With Bizarro clinging to life, Red Hood and Artemis our left to deal with a high level threat that prove much too powerful for them. The fight is frantic and fast and Bizarro does what a Superman should, he saves the day. He defeats the villain with booming “DO. NOT. HURT. BIZARRO’S...FRIENDS”. He fights, he wins, he falls, and surrounded by his family, he…

Will need you to buy the issue to find out. I have intentionally only reviewed comics that I recommend so far (I have some articles finished but not yet published) to set the standard that I am a fan of this art form and want people to enjoy it with me. This is a MUST buy for longtime readers and newcomers alike. Each issue is fast, fun and surprisingly emotionally driven, in the good way, not the teenage angst kind of emotion. You’ll be excited every time Red Hood fires two guns while doing a flip, scared when Artemis comes face to face with her past demons, and tear up when Bizarro calls his teammates the “Reds” for the first time. They’ll be manly tears, but tears all the same.


Red Hood and the Outlaws is published by DC Comics and is available at your local Comic Book Shop, DCComics.com, and Comixology. It is written by Scott Lobdell, with art by Dexter Soy.