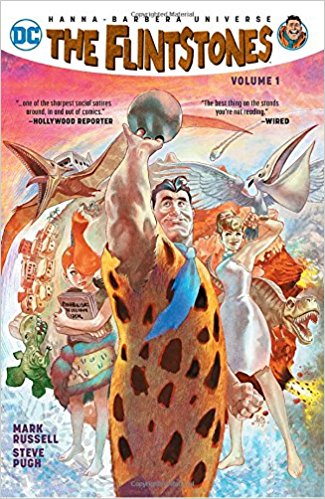 Since my first post I have been looking for the perfect first comic to review. I didn’t think finding the right comic was going to be difficult, but two weeks went by and I couldn’t find the right one. Now don’t get me wrong, there have been plenty of great comics: I love Tom King, his Batman run is crazy, Wonder Woman’s amazing arc ended, Marvel’s Venomverse has begun, and I follow almost every other Image comic in existence, but there was nothing I really wanted to speak on. Good is good, great is great, but nothing was speaking to me and why write about something if it isn’t calling for it. So I made the decision to do my first actual review as a sort of retrospect, good start right? It’s like a clip show in the first season, but I promise it will be worth it. I am going to talk to you today about "The Flintstones" #12, and in turn, the entire series.

The 12th and final issue of the Mark Russell and Steve Pugh’s limited run of The Flintstones capped off a series that has transcended the genre of “comics based on old TV shows that are generally crap” and created something entirely of its own. The first family of Bedrock takes shots at politics, religion, gender equality, workplace relations, PTSD, hipsters, and commercialism, among other hot button issues that Russell expertly weaves into a narrative that is both frighteningly real and unbelievably surreal. The finale is much less side splittingly funny than what had come before it but it wraps up every character’s arch in a meaningful and sweet way. What had felt like a series of connected, but not serialized, issues culminates in a heartfelt conclusion that left me melancholy for not being able to continue the run and excited to reread the collection again in its entirety.

I feel like "The Flintstones" deserves more, so I want to walk you through why this run is so special. When DC announced that it was launching modernized versions of older Hannah Barbera properties, no one, and I mean NO ONE, was excited. Previews dropped and we found out that the Scooby Gang became a hipster monster squad, the Wacky Racers were fighting their way through an apocalyptic wasteland, and the Flintstone’s transformed into an all too literal and realistic version of themselves. Three of the four series were exactly what everyone expected, at best bubble gum, a popcorn comic to read and forget, at worst a garbage fire that last only a few issues, enough for a single trade.

"The Flintstones", however, became something different. It was cutting and witty, with gorgeous ink and colors and something that is otherwise non-quantifiable. "The Flintstones" was filled to the brim with heart. You felt for these characters and you understood who they were and the reasons behind their actions. These were real beings with real connections who JUST SO HAPPENED to live at the dawn of civilization. I’m not saying people, because some of the hardest hitting and darkest arcs come from the animal appliances. They are no longer the one note “it’s a living” jokes from the cartoons, these are fully developed characters who have to deal with their enslavement and objectification in a world that LITERALLY only sees them as tools. I can’t say more without risking spoilers but needless to say, some of the most powerful panels come from the point of view of a baby elephant and armadillo.

Overall this is career defining writing from Mark Russell and proof that an excellent creative team elevates the entire work. Russell has never shied away from hot button issues that could come off as too over the top if not for the gorgeous Steve Pugh art. Add to that the cartoonish coloring from Chris Chuckry and this is a near perfect series I recommend for everyone. It doesn’t matter if you’re a long time comic reader or that long time comic readers dad. Get one for yourself and get one as a gift the next time you need one.


You can find "The Flintstones" Volume 1 at your local comic book store or Amazon Volume 2 will be released in October, 2017. The entire collection is also available on Comixology.