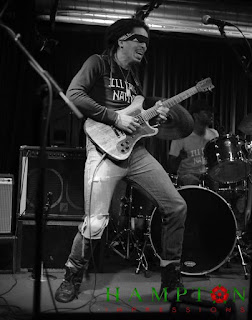 PHILADELPHIA, PA> On October 15, 2017, I was honored with the chance to sit down with Otheni "O" Thompson, Bets "Pop Pop Charmelus and Joey "Joey Stix" Pointer from the Philly power trio, Ill Fated Natives, before their performance at Johnny Brenda's in the Fishtown section of Philadelphia. I have been a fan and supporter of Ill Fated Natives music and mission since discovering them in July of this year. Since then, I have experienced their Earth Music through my head phones and live at the Stereotytans "Bacchanal" at Kung Fu Necktie. Since then, I have been enamored with their style, lyrics and honesty in their craft. Honestly, I had read the articles reviewing their songs and their rising presence in the music scene, however, I wanted to get deeper. Where do they come from, what inspires and grips them to create, how do they view themselves as artists, what emotions are underneath their power packed performances? These are the topics I wanted an in depth look at. Within our half hour conversation, we got deep into the inner workings and feelings behind the men that have coined the Earth Music sound in Philadelphia. 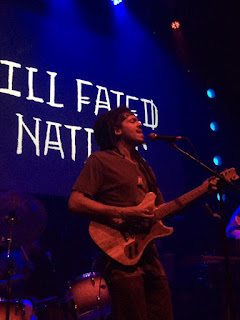 Things are about to get real. After soundcheck, we all settled into the artists green room for our conversation. We knocked around some memories, as I mentioned experiencing Earth Music at Stereotytans "Bacchanal" this past July. After some fun back and forth, I dove right in with asking Ill Fated Natives to describe their mission within this art form. Through the course of conversation, it was realized that there is not one singular mission, but several, wrapped into the Earth Music movement. Joey jumped in first. "Impacting the world...there's always a bigger picture (more so than what we are fed)...impacting change." Bets jumped in next explaining that, part of the larger mission with their music, is to have people be comfortable with shifting their perspectives. He further clarified he believes that many things aren't what they seem to be. If people can "look at it from a different angle," they may understand what's really going on around them.

Different angles and perspectives are also represented in their physical and musical style. Bets explained that the fact that "three black guys about to hit and play dirty blues...heavy, heavy rock" has the ability to shift perspective and force the fact that things may not always be what they appear to be. O jumped in and explained that their self awareness about being black rockers has the ability to assist their community in overcoming stereotypes. O discussed the "high saturation" of rappers within the music community and the realization that it's almost expected for them to be creative through that means. Although, when the community sees that they are using instruments as a vehicle for creativity, that, in itself, can affect change.

I countered their discussion with the fact that I do not see them as "black rockers." I experience them as talented musicians using their instruments as a means of musical and lyrical fluidity. As they grind on the guitar, bass, drums and marry their techniques together with their lyrics, they place their soul on the line as a testament to their mission of self awareness and alternative creativity. 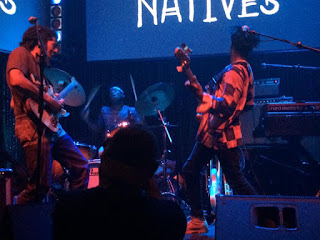 We then jumped into possible musical inspirations that led to them forming a power trio. The classic power trio is a forced to be reckoned with. Three musicians, in front of a crowd, live, loud and raw. This is Ill Fated Natives time tested benefit to their shows. No flash, all soul power. As I opened discussions up for inspirations, Joey explained that he believes that "divine alignment" was responsible for the formation of this trio. This was not a conscience decision, but a force that was supposed to happen. The three were separated into two other bands in the beginning, however, each member exchanged contact info to connect in the future. As it happens, the weekend after they exchanged contacts, that's when it hit. There were originally five members in the collective project, however, all the energies may not have been aligned. O, Bets and Joey are the members that remained after about one years time. Going forward, they realized that they were growing as an organic entity and continued to play, jam, work on songs and sacrifice.

Sacrifice is a keyword to focus on when listening to Ill Fated Natives and experiencing them in a live element. Their sacrifice on time, energy and creativity is evident as they transform into soul soldiers on stage, surrounded by their electric energy which fuels their connection with their Earth Music.

We transitioned the conversation from sacrifice and the definition of Earth Music (which is very much the only way to describe their blues/rock/fuck/metal/soul/power/revolution music) into talks about their, what I believe to be, their most integral track, "2+2." Music has different appeals and different meaning to each individual. Circling back to the beginning of this article, we discussed the "different angle" and "different perspective" tenets of Ill Fated Natives mission and how this applies to their style. As our conversation continued, we wrapped those ideals into individual interpretation of their music. Bets shined light on the fact that, while they know what they are writing and how they are crafting their songs and performance, they appreciate when other express their interpretation of their music. Make it your own. 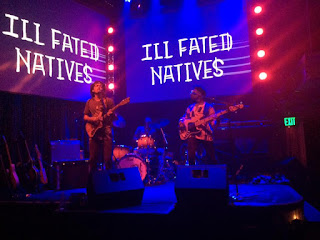 As we continued to talk, I brought up the notion that I, personally, interpreted "2+2" (two plus two) as 2 x 2 (two by two). Some of the opening lyrics on this track include, "there's a war going on outside, and their ain't nowhere to hide, will you stand and fight, I don't know." The reason I interpret this song as 2 x 2 (two by two) is that I feel that, yes, there is a war going on around us and the only way to fight it is in pairs. I expressed my feeling that, if we are to fight what's going on around us, we need to take our neighbor, brother, sister, friend, etc., and pair together and not leave each other behind. I sincerely appreciate that Ill Fated Natives was open to this interpretation.

We further discussed their newest single, "Blind Man" and a specific lyric within the track , "even the blind man knows what's going on." The sentiment in the room was that people truly need to open up their eyes to what's going on around us and take hold of the self-awareness revolution and encourage each other. We cannot be put into corners or separated based purely on what we are perceived to be.

Overall, my intimate experience gaining insight into the backbone of Ill Fated Natives message and mission was very informative. These guys are on to something that the rest of the world needs to experience. From speaking on their motivation to awaken the world, to their inspiration to keep the art moving and their hopes for an awakening, they definitely connect with each other on a spiritual level. Their Earth Music accurately defines who they are and where they are going. Ill Fated Natives is on the rise. So, get woke and get to work.

Ill Fated Natives music and performance schedule can be found on their website.
Ill Fated Natives next concert is on October 21, 2017 at Puck in Doylestown as part of the David Ivory and Flextone records showcase. Tickets are available on the website.