Batman: The Devastator - My Issue with DC's Dark Nights One Shots 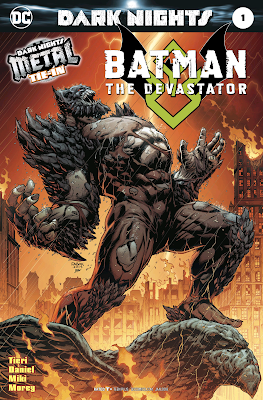 I have so many issues with these one shots, and The Devastator perfectly personifies my frustrations. You know you're in for a rough time when the the creative team includes a ”plot” credit and “words” credit and this story is so "paint by numbers" that  I've confused which character is which WHILE writing my review. The story is so obvious and non-enthused that I wonder why they even chose to even put these out. Instead of filling out this insane and crazy universe with content to match, they put just enough in to get you to understand that “yes, this Batman who people call the “Murder Machine” is evil and move on.

My biggest disappointment comes in the lack of foresight. These characters have such cool designs that I immediately wanted a series’ based in their worlds. DC could have had seven new “Injustice” runs if they had just put a little bit of effort in. Instead we got seven (well six at the moment) one shots that did nothing but convince me that these are cool looking characters and nothing else.