Stereotytans Tear The Roof Off Of Mistletoe Jam 2017 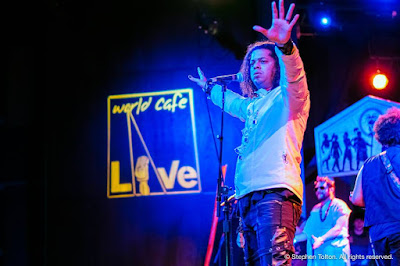 The Oracle spoke and the Stereotytans tore that sucker to the ground with the Demygod Army at hand.

Fresh off of their stint as 93.3 WMMRs Jaxon's Local Shots Artist for the month of December 2017, Stereotytans rocked this world and beyond on December 28th at Jaxon's Local Shots Mistletoe Jame 2017! Hyperion, Kronos, Okeanus, Promethus, The Oracle, Zeus and Athena brought a pulsing, super sonic, live 4-D experience to the World Cafe Live to rock out the end of 2017! Complete with visuals, theater, character development, audience interaction, and theme laced live music, Stereotytans had the crowd following their every move! Their hits , "Lost N Found" and "Bumble Bee Weed" where absolute crowd favorites! Audience member, Ian James, was quick to say, "This is the best live show I've seen, hands down!"

Footage and photos are available on the bands Facebook page! They are available on Instagram and Twitter: @stereotytans. Their self titled, debut comic is now available online! Also, be sure to check out, listen to and purchase their debut, full length album "Escape"! Their next scheduled appearance is as guest panelists at the upcoming Lehigh Valley Itz-A-Con!