Review: Batman - Creature of the Night #2 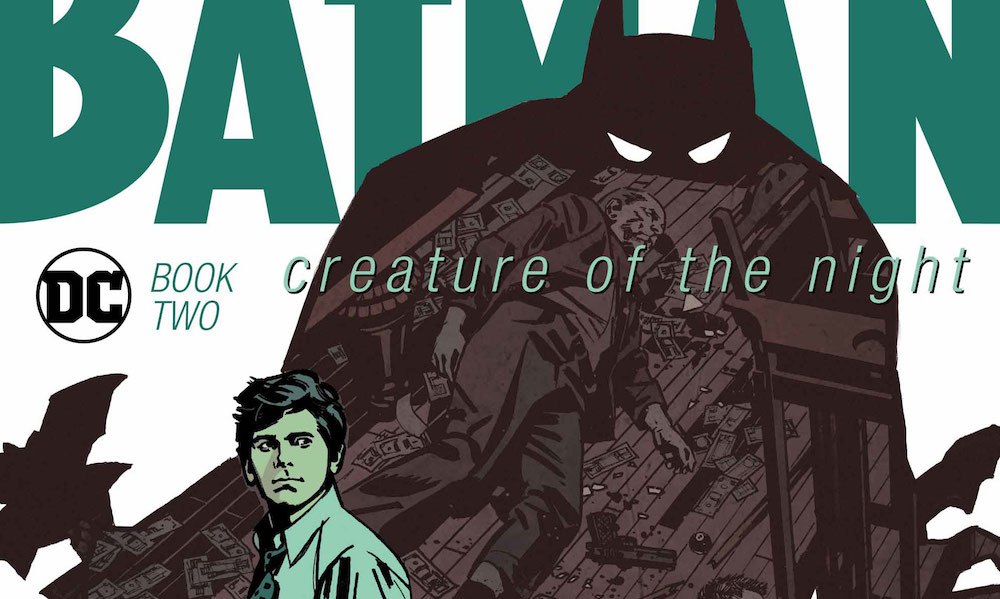 Hello. My name is Bruce Wainwright and I am Bratman, well, not exactly.
In the next installment issue of Batman: Creature of the Night, the Batman keeps his promise
as it protects Bruce at all cost.
Throughout  Boston, violent crime are becoming less and less as reports of a
dark figure has police baffle and eyewitnesses are silent.
Meanwhile, the Wainwright Investments firm is on a winning streak.
But as Bruce looks into the firm’s future to become a beacon of hope,
Bruce tragically learns that the world can’t be made into what he wants it to be.
Realizing this mistake, might have long lasting repercussions that are reversible.
Here now is my review of Batman: Creature of the Night issue #2.

This poltergeist type-Batman will certainly boggle the mind as fantasy and reality become fuse together.
This is not your ordinary Batman comic book story.
We can see how the character, Alfred and his nephew Wayne build their firm into a very
successful juggernaut  as various investment opportunities seem to knock at their door,
Bruce is looking towards the future. Bruce wants to do more than just being a investment but a
caring foundation (Sounds familiar).
Seeing what sort of immeasurable loss Bruce has had, he wants to help others
who were the victims of violent crime.
An establish foundation where children will have a chance to survive and start a new life.
Even helping a girl named Robin Helgeland, beckons his involvement to save as many as he can.

The narration of Alfred being read like a personal diary enlightens the story into a documentary series
of events about Bruce.
One can see it whenever Alfred speaks with the words in manuscript.
This change in fonts between characters opens a great deal of feelings regarding his nephew.
The flashback of old comic strips in order to punch the story with a self-righteous act is sensational.
Great drawn sketches and coloring to set the mood especially how the Batman
has darkness is cast down like a blanket of doom on those who prey on the weak.

What makes Creature of the Night so interesting is a personal connection we all have with heroes.
We all dream one could call upon, a hero or spiritual warrior to avenge a wrong.
As tragedy happens unexpectedly, Wainwright’s Batman offers the kind of justice that brings results and
that’s the scary part. If this Batman yields to the will of one person, is that person worthy to be its master?
Batman that has no remorse nor moral conscience of its actions is a dangerous Batman.
This Batman will stop at nothing to make Bruce Wainwright and now the world can be force to whatever
Bruce wants it to be no matter the cost. Next issue of Creature of the Night comes out on February 28th 2018.


That’s my story and i am sticking to it. This is Brian A. Madrid reporting.