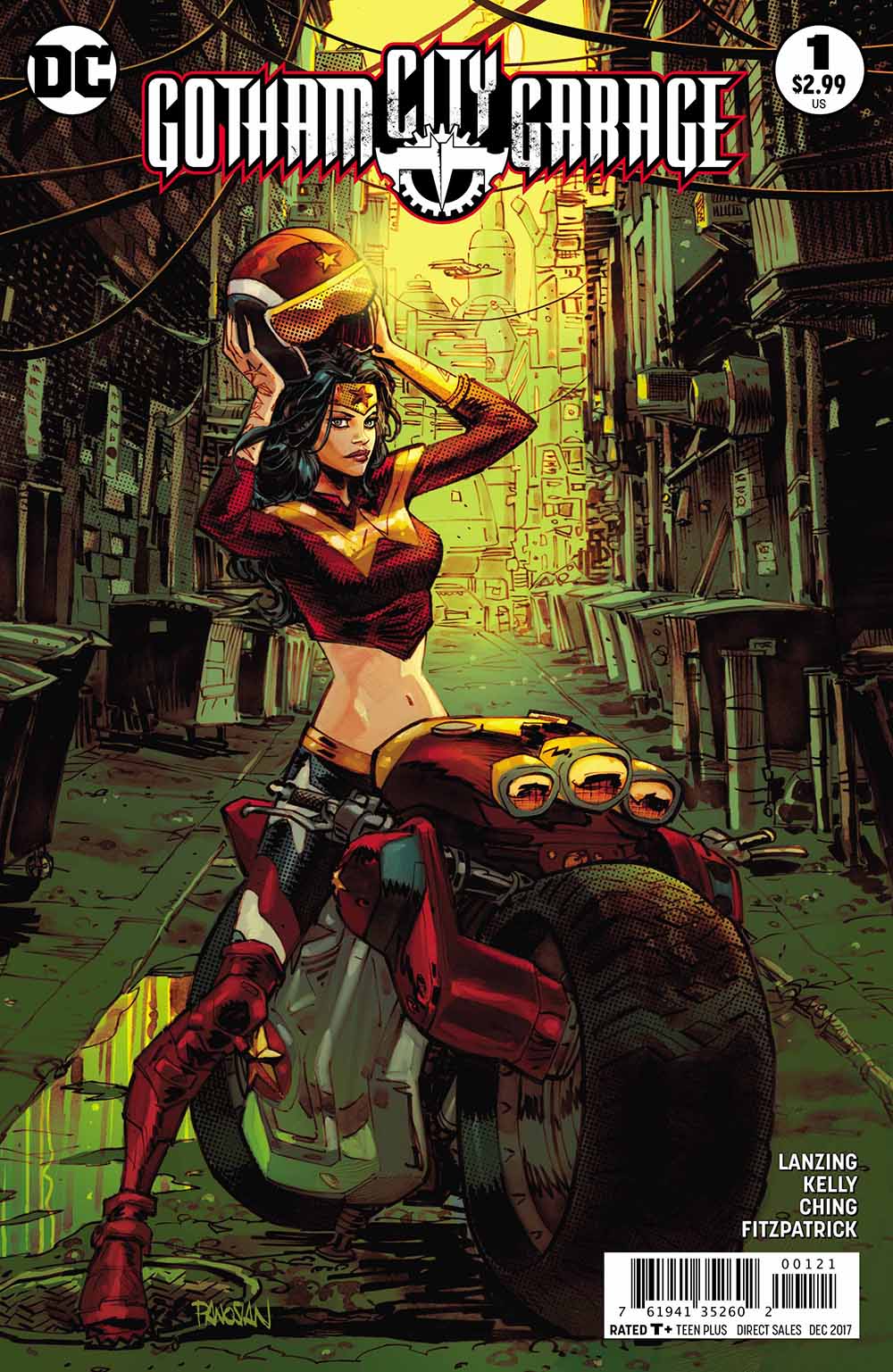 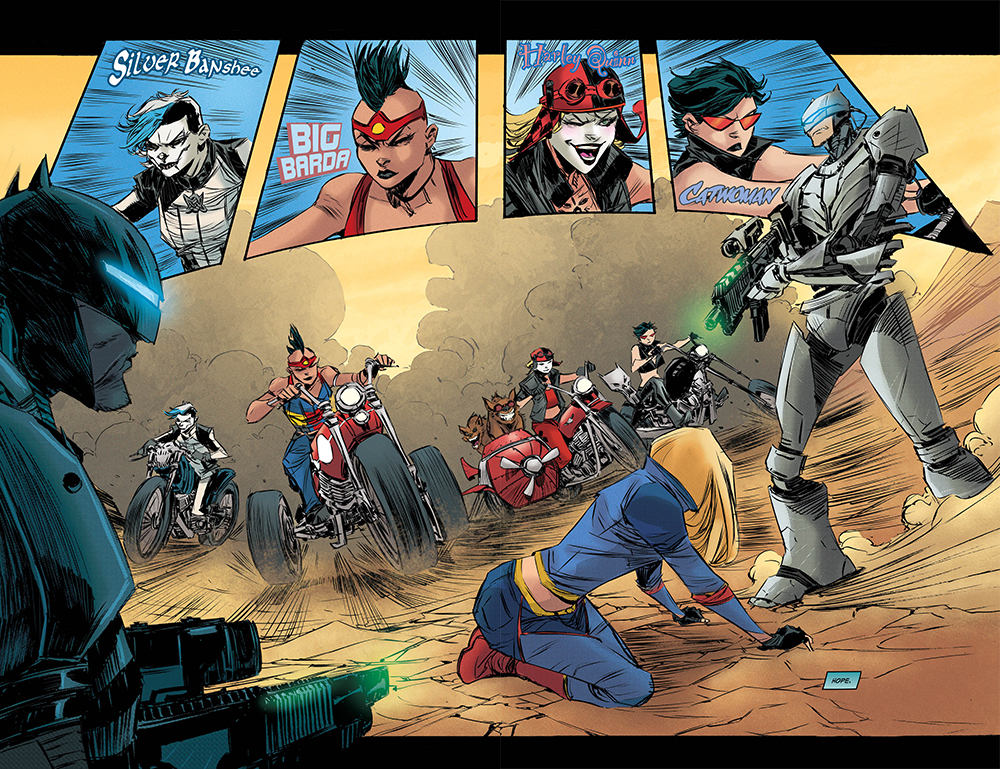 Set in the distant future, Luthor Rise, the last city on Earth, is a thriving utopia. Owned and controlled by Lex Luthor and policed by automated Batmen, Kara Gordon feels her life is askew. Coming home, Jim Gordon tells her life is in danger and needs to leave the city. Not sure what’s going on, Kara runs to escape from the authorities in hopes of reaching the edge of the protected dome. But as Batman is hot on her trail, Kara is shocked to discover what she can do. But little does she know what awaits for her outside the city and under the sun. All this and more on my review of Gotham City Garage #1.

Surrounded by desert, The Garden is a thriving community where residents are being monitored and programed resound the happy phrase,  “Lex loves you”. So many of the post apocalyptic storyline often begin in the dessert. Kara Gordon, which is a nice twist of being Jim Gordon’s daughter, feels misplace and clueless of how she is. Somehow or other, the Gardeners has discover the one person who can be manipulated for the good of the Garden. Its none other than Kara G. Love how familiar characters from DC have a new origin story with a sadistic twist. When you think of Lex Luthor and Batman, one would think their the opposite ends of the spectrum, but not here. 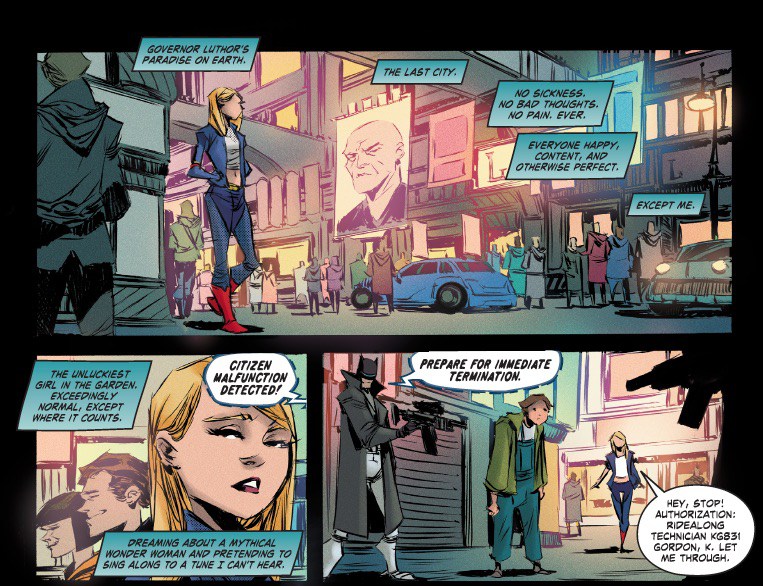 Love the drawn Bat-Robo cops who protect and eliminate anyone jeopardizing the tranquillity of the last city on Earth, The Garden. Many if not all of the women of DC looking like very sexy biker chicks are looking very trim and well drawn. Be expected to see these Loitia dolls in action figure forms at a store near you. Though the Luthor Rise community drawn like a utopia is reminiscent of the science fiction television movie, Logan’s Run ( I know. I’m dating myself again). A very futuristic community where everyone is happy and no illnesses. One can see how much Gotham City has changed for the worse. 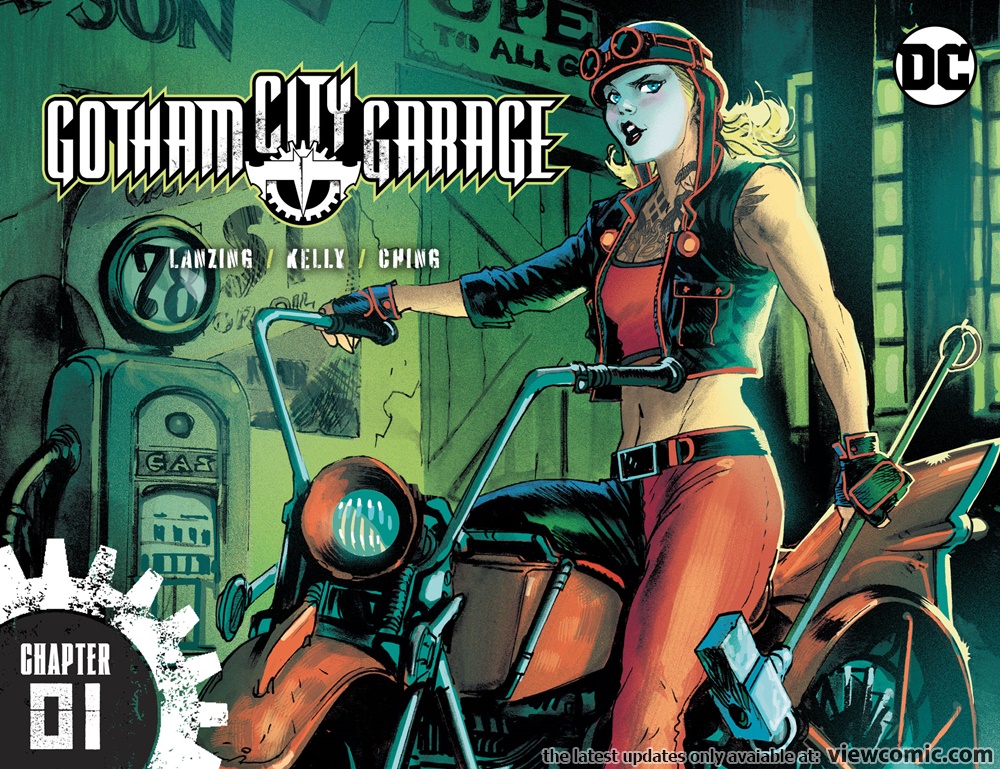 It’s female characters of DC Comics mixed with the world of Mad Maxx. Kara Gordon knows there’s something different about her. So different that the Gardeners will stop at nothing to get her. And who is leading the pursuit, none other than Batman himself. When did Batman, dressed in black trench coat and become muscle for Lex Luthor? And what happened to the rest of the cities of Earth? We’ll know more as Gotham City Garage issue # 2 comes out on October 25 2017.

That’s my story and I am sticking to it.This is Brian A. Madrid reporting