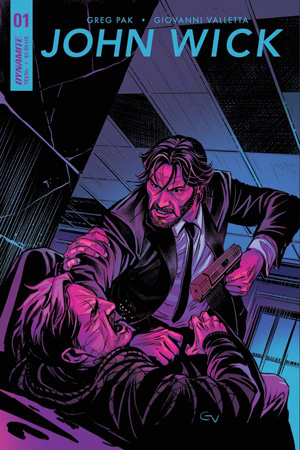 John Wick has captured audiences by storm as the lone one gunman assassin turn hero have fans cheering. With the third film installment in the works, Dynamite has brought fans more of John Wicks life in a comic book series. In issue #1, John searches for someone from his childhood past and as you guessed it, lots of blood, bullets, and bravado fills the pages til the end. John Wick hunts on those who wronged him and it’s just a matter of time till he knocks at their door with bouquet of bullets. Here now is my review of Dynamite's John Wick issue #1.

The character of John Wick is one of pain and torment. We know so little about his past but in issue #1, is early childhood sets the bases of John’s way of life. Learning to survive in the slums of El Sauzal Baja California, John bites more than he can chew escaping from a man call Buffalo. Here, we see how John early beginnings eventually forges into the man we know today. But his stealing from someone who has no conscience for life, shows John what people will do to achieve a goal. As the neighborhood block burns into ashes, John sees there is no forgiveness to those who inflict pain on the innocent.

In the films, the non-stop action keep audiences in their seats but one cannot do this on the pages of a comic book. Or can they? Scales of grey play off the emotional expression John is going through until he unleashed his brand of justice on someone, Wick style. In moments of death and murder, the palate become deep reds and brilliant white. The letter are written smoothly onto the pages to progress the storyline but when it comes to the facial expression of John Wick’s teeth clenching is spot on!

I’m a huge fan of Keanu Reeves from his days of Bill and Ted. (I know. I’m dating myself.) And to see the actor come from humble beginnings to present day has been a joy to watch. Hearing about John Wick turn into a comic book, I thought, would be a bad idea. How can you bring all that cinema action and yet capture the tormented soul onto the pages of a comic book? Rest assure, the pages holds up to John Wick persona. I hope that both the writing and the drawing continue to follow the character and his bullet-filled escapades. John Wick issue #1 now available in store and John Wick issue #2 will be available on January 3rd 2018.

That’s my story and I am sticking to it. This is Brian A. Madrid reporting!