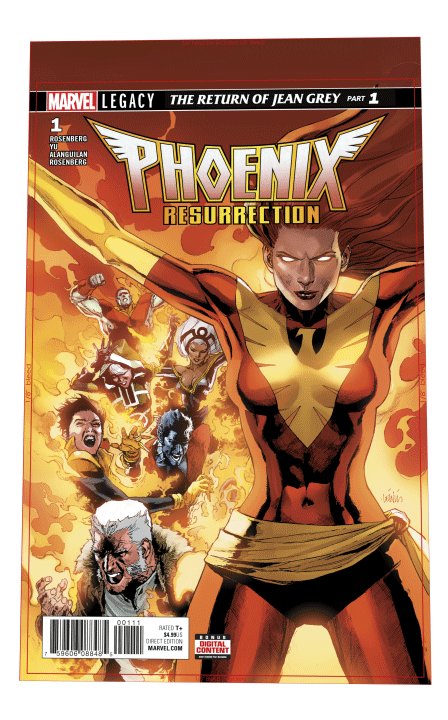 In Marvel Legacy newest issue of the return of Jean Grey part #1, starts as a mystery. Leader of the X-Men Kitty and Hank, bring together all members in an emergency meeting. An unusual energy phenomena has been discovered and has left two children in comatose state. Wth all things consider, the X-Men are familiar with the unknown and create teams of three to investigate the source of this energy phenomena from various parts around the world. Now traveling to France, the North Pole, and Manhattan the X-Men are the best of the best to handle themselves. But this is not your typical away mission. Get ready, here’s my review of          Marvel Legacy Phoenix Resurrection issue #1.

Together with the film, X-Men: Dark Phoenix, debuting late 2018, is a revamp story of Jean Grey from the comic book series. Like all mysteries, the story begins at the scene of the crime as an  unusual energy phenomena grabs our mutant warriors attention and find themselves a bit of a pickle. Good fight scenes with HellFire guards,a yellow and black costume wearing Wolverine, and a Acolytes. Bruises everywhere, both egos and bodies. Biggest surprise is seeing a white-haired, weathered Logan still part of the team (Didn’t he die already?). But no sooner does the battle end, there’s something in the sky that holds everyone’s attention, including a a pretty young redhead waitress name Jean Grey.

There’s some big panel moments in this comic book. On average the pages offer 5 to 6 panels giving a large scope of the action.  Also, if you get it, comic book offers a holographic front and back cover. Love the cover, the heat is on! The colors are vivid as three of the action scenes relinquish the backdrops of conference theater, an abandoned castle, a remote frigid tundra, and a local highway diner just to name a few. Lettering between character conversation provide an upbeat tone to the storyline.

Knowing the character of Jean Grey from the X-Men movies, I found her to be somewhat of a  mousey character. Sure, Jean G. can remove you from existence, one molecule at a time, but in a brawl, good luck surviving SunShine! To summarize, a good start bringing readers into the story of Jean Grey. Her portrayal of this young, working girl gives credit as good working girl persona. Though this issue leaves me aching to see Jean turn into the Pyrokinetic Phoenix, we’re gonna have to wait for the next issue. Also, seeing Logan as an old, beat-up, and weathered man and not the stoic youthful character I’m accustomed to does surprise me. Its a 5 part series with issue #2 coming out this January 3rd 2018.

That’s my story and I’m sticking to it. I am Brian A. Madrid reporting.