ATLANTIC CITY, NJ> A glint of steel, a flash of light, NJ Horror Con was quite alright! This passed weekend, The New Jersey Horror Con and Film Festival debuted its event at the Showboat Hotel in Atlantic City, New Jersey. For an event in its second year, there has been a wild amount of growth leaving room for unlimited potential. While their previous Edison, New Jersey location started to feel familiar, moving to the Showboat Hotel suits the event well. There was ample amount of room inside the venue itself and plenty of space to walk by yourself or with your family (strollers included).

The horror scene, while similarly passionate in terms of fandom dedication, feels drastically different than the traditional convention scene (Wizard World, Reed Pop, etc.) There is a definite and immediate unity felt within the crowd. Personally, I've experience many types of conventions that revolve around fandom crowds, and yet, the horror scene feels the most genuine. Walking among the crowd, I felt the love of the genre from all angles. The best part was seeing parents with their children introducing them to the wonderful world of the horror genre! For being a horror con, there sure were a ton of smiling faces! While walking through, I stopped and spoke with Sleazy P. Martini (GWARs longtime manager). We discussed the love of this genre and how, as kids, some of this stuff scared the dickens out of us! I grew up watching “Tales from the Crypt” in the middle of the night while trying to work the “bunny ear” antennas to make sure the signal came in clean. I was fascinated AND scared at the same time! My firm belief is that the horror genre, crowd and scene has the power to unify. Everyone is accepted. 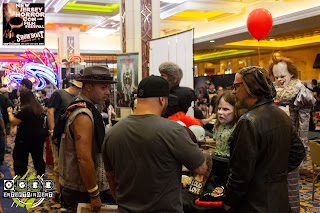 Creatives, artists, actors, musicians, fans, cars, you name it, the NJ Horror Con had it! This year, attendees were able to experience an awesome pairing 1990s icons, Dennis Haskins (Mr. Belding – Saved By The Bell) and Williams Daniels (Mr. Feeny – Boy Meets World). Other crowd favorites included Cassandra Peterson (Elvira: Mistress of the Dark), Linda Blair (The Exorcist), Dee Snider (Twisted Sister), Adrienne King (Friday the 13th), Doyle Von Frankenstein (The Misfits), Edward Furlong (Terminator 2/American History X), the one and only Father Evil and many more. Notable cosplayers seen at the convention include @FuriesRevenge, @KayKizzleCosplay and Freddy MacKrueger. My family fell in love with the organization Pinups for Pitbulls, Inc, which creates positive awareness for the particular dog breed.

The NJ Horror Con and Film Festival has been consistently upping the ante of the content for the price of admission since their inaugural event in the beginning of 2017. From the organizers down to the volunteers, obvious dedicated is displayed. I look forward to continuing to support his convention is all aspects. Maybe we can see a return of the comic book rock band from Philadelphia, Stereotytans? Let’s see what 2019 brings us! For all the latest info, follow the NJ Horror Con and Film Festival on social media: @njhorrocon and on the web at http://www.newjerseyhorrorcon.com/