LANSDALE, PA> On August 11, 2019, Lansdale based band, AM0RA, will be celebrating their fifth anniversary as a band with a beer debut and concert, organized by local hype man Dave Heck, at The Underground located at 408 W. Main St Lansdale, PA. Cold Climb It (Matt Brasch from The Wonder Years) , Shakeout (doing a record release) and another local favorite, Andross, will also be on the bill.

In addition to celebrating their fifth anniversary, Round Guys Brewing Company created a special batch of an AM0RA anniversary IPA, with mango and black tea, that the band has dubbed, "Mango: A Recipe of Sweet Deliciousness." Doors open at 5pm, tickets are $10. Event info and tickets can be found online. 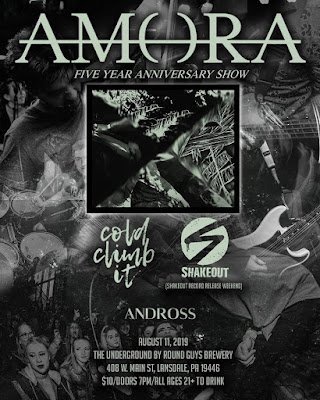