Venue manager does his goddamn job


By: Jason Ray Strickland | Director of the Phoenixville Complaints Department and sad boi in Girl Science

Yeah yeah yeah, I know. In today's world, people like their hard work and attention to detail to be recognized to some capacity. It’s basically a participation trophy that shows they know how to do their job, no matter how meaningless or how unimportant that job may be. The waitress chastises the customer that doesn’t leave a 20% tip, the retail worker wants that 5 out of 5 customer service score because they almost gave the customer the correct change, the former Marine wants a Veterans discount at both the restaurant and big box store because THEY SERVED OUR COUNTRY. It’s all about the recognition. That’s why Yelp! and Facebook reviews are so important. Workers of today are rewarded for doing their job. Sure, you can get a raise or a promotion or a fancy certificate to hang on your wall, but none of that matters unless you get praised by a customer on social media. It’s quite ridiculous if you ask me. If I go to Wawa and get 60% effort from the cashier to turnaround, grab onto the brand of cigarettes, ask me for my ID, scan my ID, scan the cigarettes, give me the transaction total, then give me the correct change (which is automatically figured out by the register) I am going to tell them to “have a nice day” That’s it. I’m not going to leave a comment on the wall of Facebook to let everyone know how competent a cashier was at doing a menial task. It’s their job.Look, I’m not one to ignore when someone goes above and beyond to do a job. It’s what America was built on. Pioneers. But I’m also not one to publicly praise someone. Until today.Last week after attending a trivia night at The Underground By Round Guys Brewing Company, I was kind of bummed out to find advertisements for the July events, which wouldn’t have been so bad if it wasn’t already August 2nd. I liked the place, and I would have liked to return if I knew what my options were on any given night. Oh well.In a hopeful turn of events, it was brought to my attention that both Victor Traps and Black Friday Death Count, would be playing at The Underground on August 9th. I was ecstatic. After making the hour or so drive, I walk in and immediately headed to the bathroom. Driving for an hour after having multiple coffees is hell on the bladder. As soon as I walked into the bathroom my eyes fixated onto the wall. Something happened. Venue Manager Ryan Weiss did his goddamn job. No longer was I looking at July events flyer. but instead I was looking at an August events flyer. Some might say that exchanging one piece of stock paper for another is an easy job even for a 6 year-old, but when you are a venue manager, even that is extraordinary work. I can only imagine how tedious and stressful making multiple Facebook event pages is, and on top of that replying to emails. Ryan once told me he replied to an email a week late, so I imagine he gets hundreds, if not thousands of emails per week. He seems pretty overwhelmed sometimes. So I would like to publicly praise Venue Manager Ryan Weiss for doing something as simple as changing a flyer taped to a bathroom wall. Overcoming adversity isn’t always easy, but Ryan did it.I finished my business, washed my hands, and stood there staring into the mirror basking in the glow as a new repeat customer was born.But I couldn’t dry my goddamn hands because there weren’t any goddamn paper towels in the goddamn paper towel dispenser. 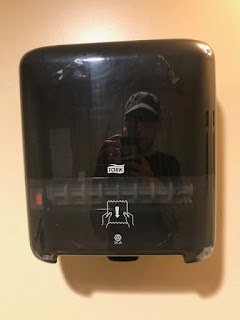