PHILADELPHIA, PA> Fresh off the heals of announcing their Indiegogo campaign, Stereotytans took the stage last night at the 2019 Liberty Music Fest presented by DVT Entertainment in partnership with Broken Goblet Brewery. Stereotytans commanded the stage as soon as they processed in from the the rear of the building. Turning heads and dropping jaws where peppered throughout the crowd. Their rocket powered performance shook the building and lifted the attendees spirits into a swirl of demigod pandemonium (video below). Today, Stereotytans announced their epic return to the J1-Con Anime & Gaming Expo on November 3, 2019. This is a DO NOT MISS performance! J1-Con tickets are available online. 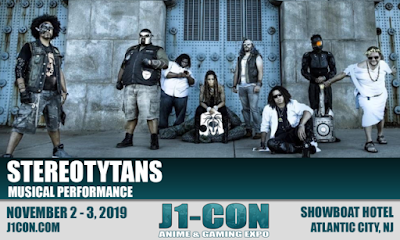 Stereotytans next performance is at the Glenside Ale House by Round Guys Brewing Company on September 28, 2019 as they celebrate their one year anniversary as a business at that location. This will be a FREE performance for the community. Be sure to get yourself a Bumblebee Wheat Ale (Round Guys Beer inspired by Stereotytans) to enjoy during the show!