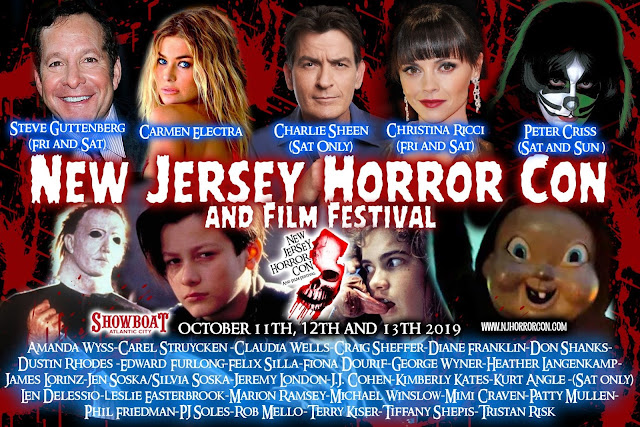 ​New Jersey Horror Con and Film Festival has confirmed that entertainment legend Charlie Sheen, Charlie has appeared in films including Platoon (1986), Wall Street (1987), Young Guns (1988), Eight Men Out (1988), Major League (1989), Hot Shots! (1991), and The Three Musketeers (1993). Charlie also starred on the hit TV series Two and a Half Men which earned him several Golden Globe and Emmy Awardnominations. He most recently starred in the FX comedy series Anger Management, which concluded its 100-episode run in 2014. He will make his appearance at The Showboat on October 12th only from 11am to 7pm. Charlie Sheen joins an already extraordinary gathering of celebrities for the entire weekend of October 11th, 12th and 13th in Atlantic City, including:

“This is by far the best line-up of celebrities that we have had yet,'' says Ryan Scott Weber, a New Jersey-based film producer and director who has shifted his talents to producing the New Jersey Horror Con and Film Festival. “For us, it’s all about the horror fan’s experience at our show. This time around, we have re-created the Spaceballs set so fans can have a photo op with George Wyner in costume as if they were appearing on the film.  We will also have a replica of the Police Academy police car for photo ops with four cast members from the movie.

​In addition to established talent, NJ Horror Con and Film Festival is the only con that gives filmmakers a showcase for their work. “We run films made by local and regional talent who submit their work to our panel for consideration. There are some amazing movies being made out there and our show is the only one that gives these writers, directors, actors and special effects people exposure and the opportunity to win awards,” continues Ryan.  Films will be screened continuously during all three days of the con in a special screening area on the show floor at no additional cost to attendees. In addition to aspiring filmmakers, established production houses like Troma Entertainment and Wild Eye Productions will have booths on the show floor.
​The New Jersey Horror Con and Film Festival will run at The Showboat on the Boardwalk in Atlantic City from Friday October 11th to Sunday October 13th. For more information, advance tickets and more go to www.newjerseyhorrorcon.com.