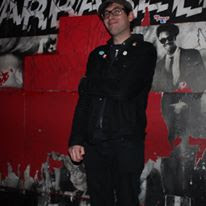 PHOENIXVILLE, PA> In an unprecedented evening, actually wait, no, let's start over. In a totally predictable evening, Phoenixville punk and regional sad boi Jason Ray, mistakenly ended up at what he thought was a Lansdale show at The Pickering Creek Inn last weekend. The bill included AM0RA, Bottomshelf, Nervous Wish, Black Friday Death Count and L.M.I. so, naturally he thought he was in the right place. After realizing that the advertisement posters on the walls were, in fact, accurate, Jason finally realized he wasn't in Lansdale. According to witnesses, he was enjoying the show with his signature pounder of PBR and analyzing everyone's perceived attitude in the crowd. Holier than thou much? Regardless of his apparent enjoyment, Jason still managed to dip from the show early undetected. At press time, Jason was comparing himself to the personality of opossums eating from a garbage can and taking bathroom selfies.