Local brewery bros team up and actually do manual labor 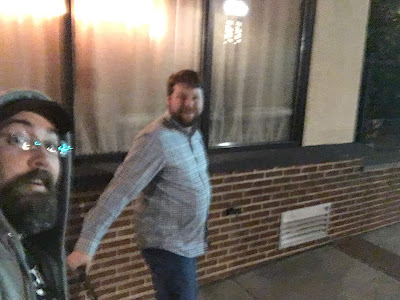 In an unprecedented evening, local brewery owner, Doug Bellenger (Well Crafted Beer Co.) and local events manager, Ryan Weiss (The Underground by Round Guys Brewing Company) were seen actually doing work that required the use of their limbs and muscles. These guys, usually seen networking at events, posting things on social media and drinking countless pints of beer on barstools, were required to get up off their asses and move something. Not only was this object a ten foot long projector screen, it had to be moved from one business to the other. These brewery bros braved the chilling elements and the mean streets of Lansdale and moved the projector from Well Crafted to The Underground. Wow, what heroes. At press time, Doug was seen moisturizing his precious hands while Ryan ordered another Tiger Tail (as if he would order anything else at Well Crafted...)