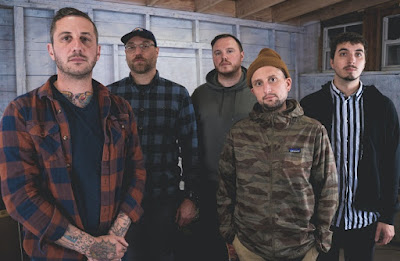 Due to an error in studio booking time, which caused an overlap in musicians being in the same place at once, members of Kill Verona, Shark Attack, Guillotine and No Roses thought they were in a new band, or something, and ended up recording an EP of new material. Unaware that they weren't recording for Kill Verona, Shark Attack or...the list is entirely too long, the newly formed TIME has created a wonderfully melodic landscape of layered stories. A strong departure from their hardcore roots, musicians  Chris Margarite (Shark Attack, Kill Verona), Jon Hunt (Kill Verona, No Roses), Paul Butterly (Kill Verona, Guillotine), Matt Whiteford, and Tony Rossi take you on a emotional, operatic like build up with the title track "In Decline," leaving you wanting more of the story.
In Decline is available now on iTunes and all other digital outlets. Be sure to follow TIME on  Facebook and Instagram.