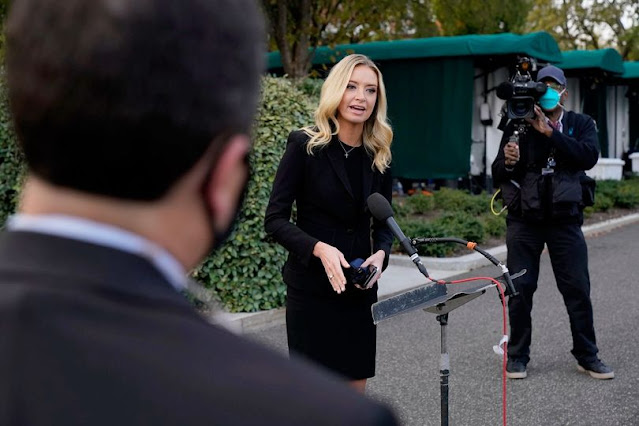 PRESSCONFERENCE, BS> Do you see what's happening in this photo? Seriously, a gooseneck mic stand? What is this, a 1980's elementary school Christmas orchestra concert? Look at the music stand. A music stand with nothing on it. What's the point? Why is it there? Oh yeah, because they didn't have a mic stand. This photo was originally seen as part of a post by viral internet sensation of October 5, 2020, Chris Elliot (probably not THE Chris Elliot). He said it best, so we're just going to quote him and let him take all the credit:

"Trashed Manhasset music stand. Like 25 years old at least. Gaffer's tape around the height adjuster. You do this when the stand won't stay up. This is its one height. 18" gooseneck attached to a "C" clamp. I think it's home made. There's some weird orange elastic wrapped around the gooseneck for no reason. Red cable. Red cables are awful. They're all you see. They're like orange extension cords. Visible printed barcode on the rental mic. Also awful. Notice the white nylon cable tie. I can't quite figure out the mic, but it doesn't fit the mic clip it's in. The mic clip is some kind of plastic generic that only opens up wide enough to accommodate the base. I'm sure it's a dynamic mic, and she's about one foot too far away to be of any use at all anyway. This is a music retail and sound reinforcement disaster."
Please, someone hook Kayleigh McEnany up with a damn Sweetwater rep already. At least finance a mic and mic stand for god sakes.