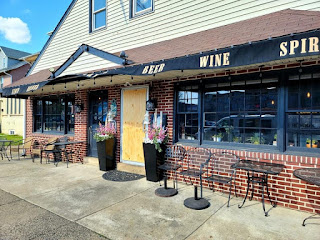 By Ryan Weiss (who else would write this stuff?)
LANSDALE, PA> In an unprecedented “swing and a miss” catastrophe, local comedic icon and owner of the Lansdale Tavern, Buddy Harris, failed to quote the movie “Clerks” after the front door of his bar blew off during today’s wind storm.

Full advantage to scribble “I assure you, we’re open” on a piece of plywood placed in the doory hole was there, but it never appeared. Harris, know for his stand up comedy and Ed Hardy swagger, failed not only the tavern, but a Facebook post in general. This would have been a grand opportunity for even more likes and shares but nay, this did not happen.

While the tavern is still open for business as usual, Lansdale shall never forget this missed opportunity. Come on dude, seriously?